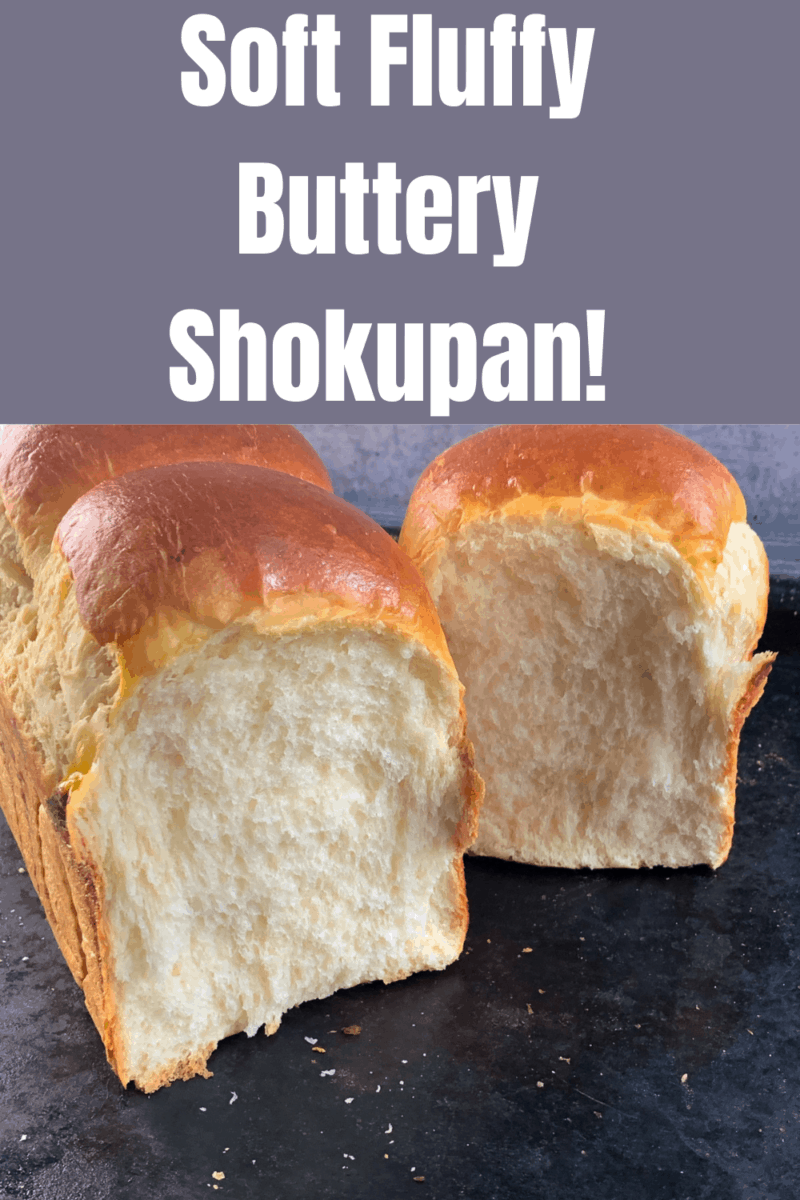 Shokupan is American white bread’s much more sophisticated Japanese cousin – it’s a much more flavorful and substantial bread, despite its soft, fluffy, buttery crumb. Think of shokupan as a fancy white bread! Great for sandwiches. Once you bake this, you’ll probably never want to buy or eat another slice of boring store-bought white bread again! Make a loaf, start to finish, in about 3 hours or less.

What is Shokupan? And Why We Love It! 🥰

Because many Asians are rumored to favor sweet milky bread, the term shokupan appears to be synonymous with Japanese milk bread. Typical Japanese milk bread has been said to have 7 times the fat compared with American white bread according to Modernist Bread’s Larissa Zhou.

However, one of the benefits of baking with a water roux (tangzhong), as will be discussed below, is the production of a moist loaf of shokupan without the need for a very high fat content.

According to the NY Times, milk bread was developed in 20th century Japan, using tangzhong. Although, curiously, I have seen at least one recipe for Japanese milk bread that do not contain milk.

Factors that Contribute to the Softness

The tender soft crumb you see in most shokupan can be attributed to several factors:

The short answer is that tangzhong is a roux, made of flour and water, at a ratio of 1:5 (ie, for every 1 part flour, add 5 parts water) created by heating the mixture until it reads ~65C (~149F); at this temperature the tangzhong turns into a smooth paste/pudding-like thickness.

I use the microwave method and find it is consistently the correct temperature using the method I describe below. The mixture is then cooled down to room temperature prior to use.

It is kind of similar to adding pudding to your cake to make it more moist.

Tangzhong, popularized in the 1990s by Yvonne Chen who wrote the book The 65º Bread Doctor, lends moisture to the loaf, even after baking because the water is trapped inside the pudding like roux.

When describing how tangzhong works, Mini Oven, one of the seasoned contributors over at the Fresh Loaf forum, states that “the gel will hold the water in the dough and slowly release it during the bake so one gets the affects of high hydration without a soupy dough to handle.”

Typically, bakers calculate the amount of tangzhong required in any given recipe by calculating 5% to 10% of the total flour in a bread recipe.

The tangzhong can be made by cooking the mixture over the stovetop until thickened or by warming it in the microwave in 25-second followed by 15-second increments until thickened (stopping in between to stir intermittently) (I need 3 intervals of 15 seconds).

I love the convenience of using the microwave, just make sure to stir well between intervals and to use a microwave proof jar (I like Ball jars).

Using the microwave, the mixture will start out very watery but after it reaches the target temperature, it will be thick and paste-like. Make sure to stir between the cooking intervals!

Rumored to be best when aged up to 12 hours in the refrigerator (will firm up when refrigerated but softens after it returns to room temp), but okay to use as soon as it cools down to at least 120 F.

Tangzhong can be stored for up to 2 days; discard if it turns grey.

If refrigerated, bring to room temperature before using.

Yudane, by comparison is a bit more straightforward and is simply made by combining boiling water with flour in a 1:1 ratio. Autumn Kitchen, a very popular bread baker on Instagram, has recommended using yudane as 20 to 25% of the flour in a bread recipe.

For example, if your bread recipe calls for 200 grams of flour, you’d use 50 grams flour and 50 grams boiling water to make your yudane. You just mix it together and you’re done. Pretty straightforward.

The swollen, gelatinised starch not only allows the starch to take in more water, increases the elasticity of the dough and increases its sweetness. Using either method for the bread dough, makes the bread softer, moist and sweeter, with a fine and delicate crumb. The bread also lasts longer.

Chef Herve Guillard of the International Culinary Institute, described the results of an experiment he conducted to compare the effects of tangzhong vs yudane vs neither (ie, a control bread) on bread quality, taste, and shelf life.

His results suggested that both tangzhong and yudane resulted in a bread lasted days later than the control bread. Whereas the tangzhong resulted in the softest bread, the yudane contributed to the highest loftiest bread and the tightest texture.

Asian bread makers also use a characteristic method for shaping sandwich bread loaves that results in a more velvety texture.

Depending on the size of the loaf, the bread dough is typically divided into 3 to 5 portions, then shaped into balls, and allowed to rest.

After the rest period, the balls are flattened (rolled out flat) and then rolled up (kind of like a cinnamon roll but without filling) and then they are lined up in a loaf pan and allowed to rise.

I like to allow the rise to within 1 inch of the top of the pan for the best oven spring.

Baking in a Pullman Loaf Pan

I strongly recommend using a USA Pullman loaf pan if you like to make sandwich bread. It’s a small investment, as they are pricy compared with other bread pans, but they are so worth it in my opinion.

These pans wipe clean so easily, they do not need to be greased/seasoned (they are nonstick), and they always seem to look new.

Using the regular/larger Pullman USA loaf pan, use about 1000 grams of dough (lid on) to 1300 grams of dough (without lid). If you’d like to get perfectly square bread slices, you will bake with the lid on and use the lower end of the range (ie, 1000 grams of dough) if using the 13x4x4 sized pan (measurements are in inches). Conversely, feel free to use the higher end range when baking without the lid in the 13x4x4 pan.

When is the Bread Finished Baking?

I’ve tried several different recipes. Each have been delicious! One important lesson that I learned is that the bread must be cooked for at least 40 to 45 minutes (using a 13-inch bread pan) and a bread thermometer is not as helpful as one would think.

Typically, many bakers know that a core temperature of 200 F or so indicates that a loaf of bread is finished. This belief was recently clarified by Jeffrey Hammelman of King Arthur flour on the Fresh Loaf forum who said:

The maximum temperature when baking bread is reached two-thirds of the way through the bake. In other words, you cannot rely on bread temperature alone to determine the duration of baking because the high/peak temperature is reached significantly prior to the end of the bake.

I learned this the hard way when I recently baked a Pullman loaf and after removing and cooling the bread, all four sides collapsed inward (it caved in on all sides). It is postulated that the sides were not firm/baked enough even though the internal temperature was on target. 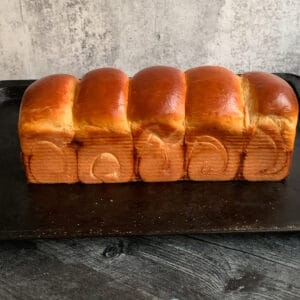 Soft, Fluffy Shokupan (Sandwich Bread) is a Must Try Bread !

For the bread dough

For the egg wash

To Make the Roux/Tangzhong (stovetop OR microwave method)

To Make the Dough

To Bake the Bread

Stir the tangzhong well between microwave internals or when making on stovetop Make sure your dough pulls a windowpane (meaning you can slowly stretch it out very thin until it’s nearly translucent; when it breaks it should have clean edges – this means it has been kneaded sufficiently).  Dough should fill about 40% of pan and you should let it rise until it’s about 1 inch from the top of the pan.  Monitor the final rise and preheat your oven about 15 to 20 minutes before you estimate the bread to be finished rising (the rise should take from 45 to 70 minutes depending on dough and room temperature).