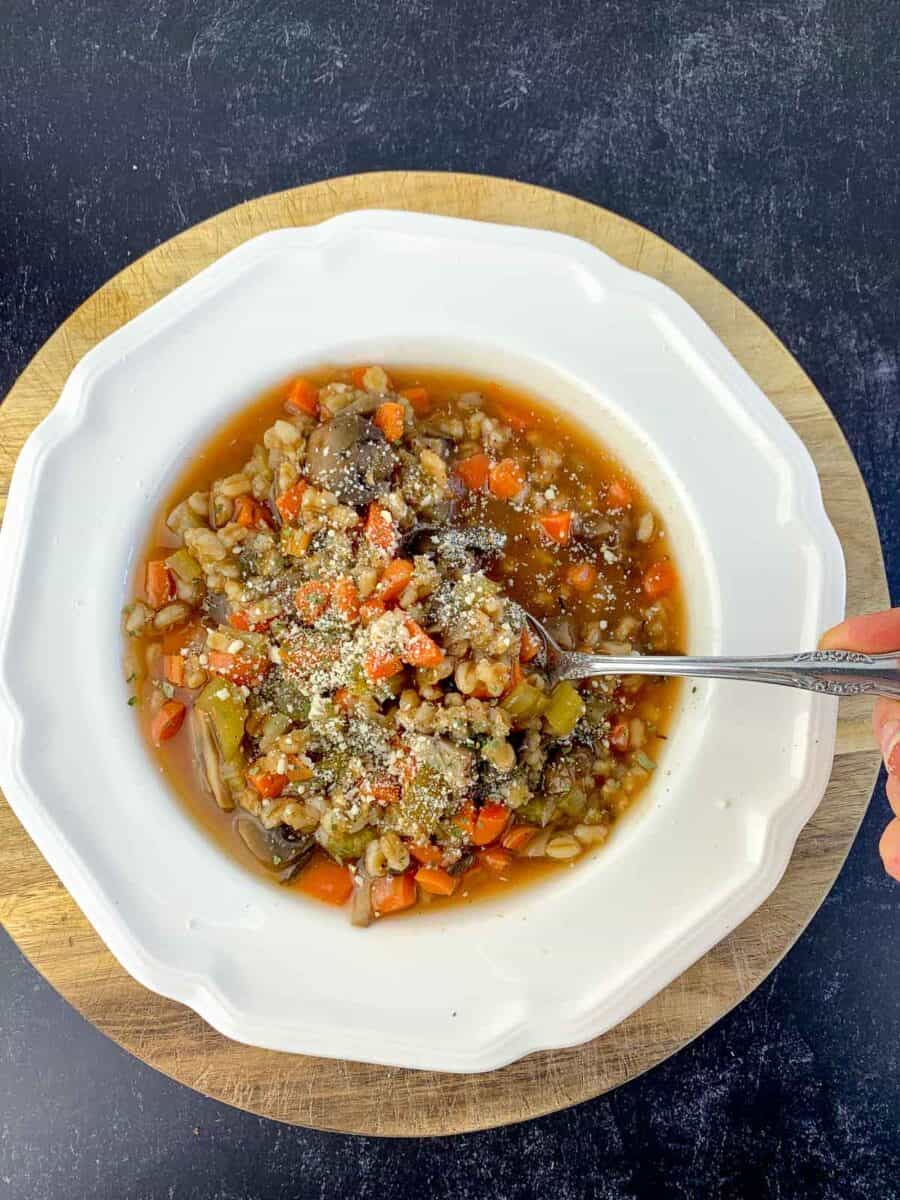 Mushroom Barley Soup is one of my absolute favorite soups because it’s healthy, plant-based, and filling. This is a super easy “dump and cook” recipe. All it requires is a little prep work (unless you buy pre-chopped vegetables)!

I really love this mushroom barley soup because it ticks all the boxes: it’s plant-based (eat more veggies!), it’s so easy, it’s fast, and it’s tasty!

I really love soup, especially when it’s chilly or cold outside. Soup just warms you up from the inside out. And healthy soups like this mushroom barley soup recipe prove that comfort food can be good for your body and soul!

This soup easily serves as a fast dinner or lunch. Just add some crusty bread or a nice big salad, and it’s total perfection!

If you’re looking for a meatier option, try my Easy and Hearty Beef Barley Soup recipe, but trust me; these mushrooms pack in a ton of meaty flavor and texture while keeping this recipe vegan- and vegetarian-friendly!

There are only 5 major ingredients in this Mushroom Barley Soup recipe, plus water (can swap for chicken stock, if desired), thyme, a bay leaf, salt, and pepper — all of which you probably have in your pantry.

I used a 1:1:1 ratio for the mirepoix. To make things even easier, you can consider use pre-chopped veggies found at most grocery stores.

You may use either version of barley; each has its pros and cons. Hulled barley is more nutrient dense and is the whole food form, but it will not lend as much thickening power and it takes a little longer to cook. Furthermore, pearled barley may be more widely available. I used pearled barley because it helps thicken the soup and because it is what my local store sells.

What Are the Best Mushrooms for Mushroom Barley Soup?

I used baby bellas for this Mushroom Barley Soup, which are small portabella mushrooms (also referred to as portobellos or portobellas). These contain less moisture than white mushrooms (ie, small button mushrooms), and are loved for their very meaty flavor.

Whichever type of mushroom you use, make sure to give them a through rinse to get rid of any dirt or debris left on these fantastic fungi.

How To Make This Homemade Mushroom Barley Soup Recipe

This recipe is ridiculously easy to make any night of the week, especially if you have an Instant Pot.

You can also make it on the stove top or in a slow cooker (see complete directions in recipe card below).

How To Thicken Mushroom Barley Soup

The easiest way to let this soup thicken up is to let it sit and do it’s thing (assuming you used the pearled barley not hulled/pot barley). This soup thickens over time. If it’s too “brothy” at first, simply pour out a bit of the broth and set aside. But don’t toss it! You may need it later.

Barley is said to soak about about 3 times its weight and so for every cup of barley that you are cooking, about 3 cups of liquid will be absorbed.

What To Serve with Mushroom Barley Soup

When it comes to brothy soup, you need to serve it with some crusty bread to absorb all that liquid and add some much-needed crunch. Try some homemade 5-Minute Bread or sourdough bread (Tartine Bread).

Craving a lighter side dish to accompany this hearty barley soup? Opt for a big side salad packed with lots of fresh veggies.

And you can always take this soup up a notch by sprinkling some sharp white cheddar cheese or freshly grated Parmesan on top before serving. Delish!

Store this soup for 3 days in the refrigerator or freeze for up to 3 months.

Over time, barley continues to soak up the liquid. So, for storage, I recommend either straining out or simply pouring off the majority of the broth into a separate container.

This will prevent the complete absorption of the liquid by the barley, which could make the barley mushy and also result in a soup without broth!

If you’re a soup fanatic like I am, you’ve got to try these other homemade soup and stew recipes: 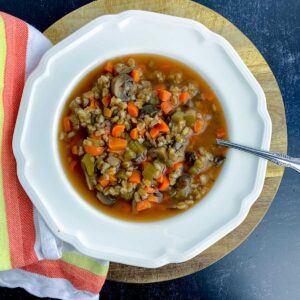 For the Instant Pot:

This recipe calls for pearled barley (also called hulled or pearl barley); if you are using pot barley, which is the whole grain form, add 5 to 10 minutes of cooking time in the Instant Pot or on the stove top.  May replace tomato paste with soy sauce (or tamari) (3 tablespoons) and dry sherry (4 tablespoons), which is what the famous Moosehead mushroom barley soup includes.