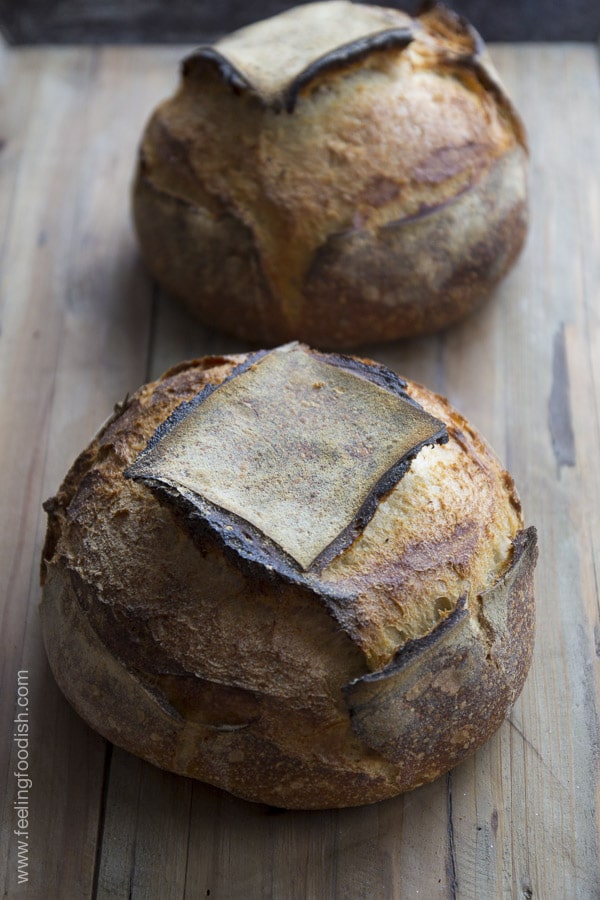 You should have been in my kitchen when I pulled this bread out of the oven – let’s just say happy is an understatement.

I know, I know – it’s kind of strange getting THAT excited over food, but I guess that it really should be no surprise coming from someone whose food blog was born after finding the perfect NY pizza dough.

It’s also become very apparent that yeast doughs are among my favorite things to make in the kitchen.

A few weeks ago, I baked this bread, which I named “Philadelphia Country bread” since it is a “natural starter” yeast bread (ie, meaning there was no commercial yeast used) made in the Philadelphia suburbs (I learned that everyone’s starter, also called sourdough or leavin, will be different based on the geographic area that you are based in). That bread was fabulous but the oven spring didn’t compare to that of this bread.

Now, surprisingly, the Tartine bread shown in this post uses the same basic formula that I used for the Philadelphia Country bread: that is, 750 g water, 200 g levain/starter, 2 g salt, and 1000 grams of flour (a 90/10 mixture of all purpose flour/whole wheat flours [King Arthur brand]).

What was different? Well, the technique I used was a little different for bulk rising the dough (I bulk proofed the dough next to a pot of simmering water to try and elevate the ambient temperature in my cool winter kitchen) and also for shaping the dough (I preshaped, let rest for 20 to 30 mins, and then did a final shape), and the starter I used was a little more mature, which from what I understand, can make the yeast more potent. I also used about 1 tablespoon of this mature starter to make a younger levain, which resulted in a much less sour bread. Finally, I’m unsure if I preheated both the top and bottom of my dutch oven last time but was sure to do so this time (I use a Lodge Logic Pre-Seasoned Combo Cooker 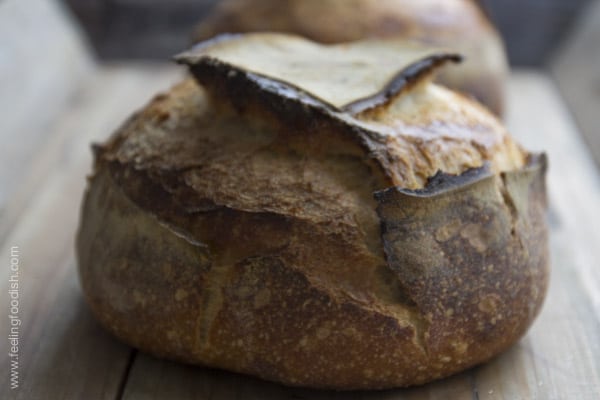 I also scored the bread a little differently, but I don’t believe that caused any major differences. I knew right away when I scored the dough, that this bread was different. You see, until now, scoring has always been difficult for me. The blade never really went through the dough very easily – it would tear the dough. I recall reading somewhere that could be because the dough was either underproofed or because it wasn’t shaped correctly.

There is a lot of great information on scoring here. 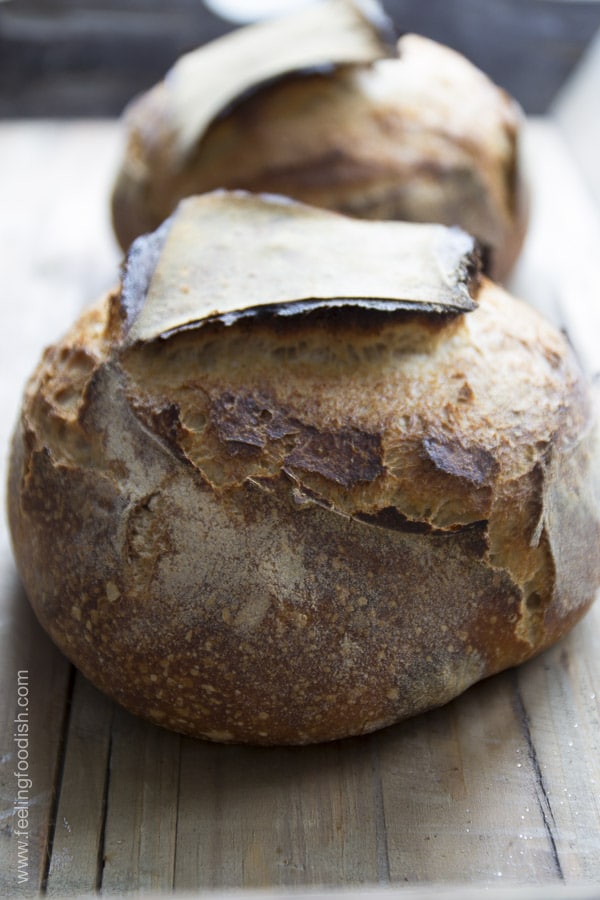 I scored this bread in a square pattern on top, and from what I recall, my cuts were almost at 90 degrees. It’s amazing that even the scoring on bread affect the final product, in this case, the shape.

In this video, at time 3:07, Chad Robertson demonstrates his shaping
technique.  I used a similar folding technique that was shown in his book Tartine Bread, which is a little simpler. 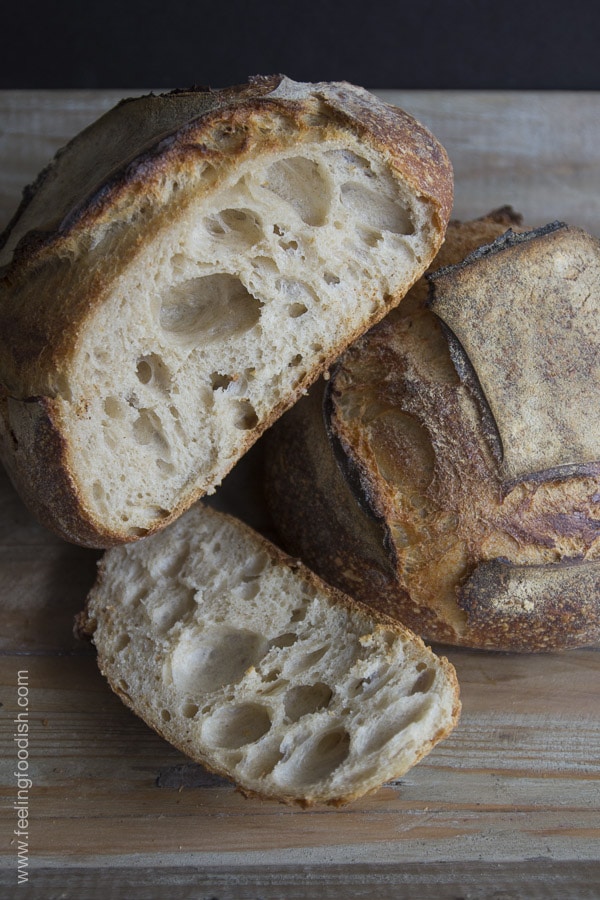 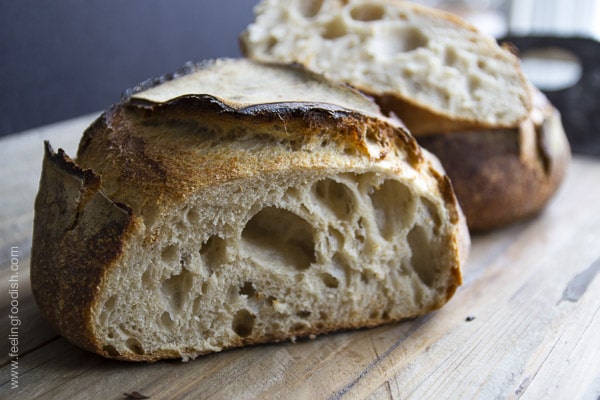 If you are a fan of Tartine bread, I encourage you to purchase Chad Robertson’s beautiful bread book called Tartine Bread. It was a wonderful addition to my library of bread books!!

If you are a Tartine bread fan, be sure to check out the fabulous blog called Tartine Bread Experiment!

Please note that this recipe requires a dutch oven or combo cooker, a kitchen scale, and an established sourdough starter.

Here’s more on the Tartine story: 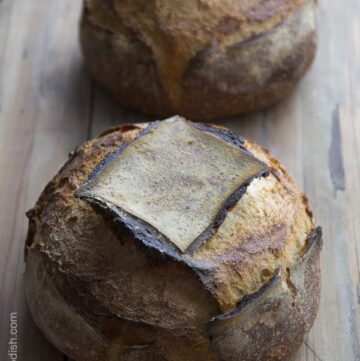 To make the levain

To make the dough

To make the dough: