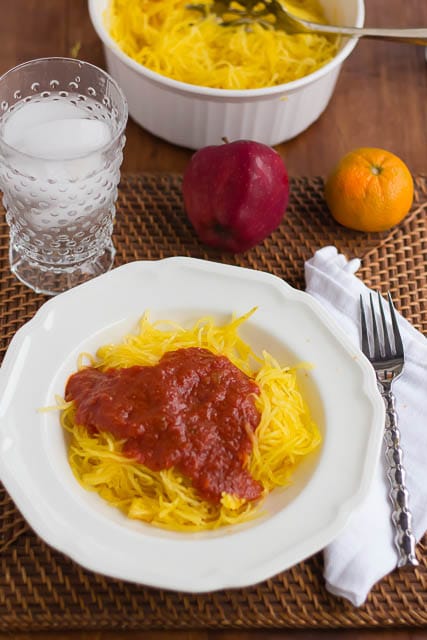 Have you even eaten spaghetti squash? If not, you must give this vegetable a try! A 3-cup portion has only 126 calories and packs a whopping 6.5 grams of fiber! This is a great vegetable to eat when you are trying to lose weight and even when you’re not.

The best part of the dish though was topping it with a generous portion of this amazing spaghetti sauce. I used my mom’s homemade spaghetti sauce (affectionately called gravy in the Philadelphia area – don’t ask me why!), which I keep stocked in my pantry at all times.

My mom’s spaghetti sauce is slowww cooked and she uses only the best brand of tomatoes as an ingredient.

Back in time, when I was a kid, our family would faithfully go the one of the New Jersey farms and pick bushels and bushels of plum tomatoes. My mother would then proceed to jar her own spaghetti sauce for YEARS using these farm fresh tomatoes.

She finally stopped doing that about 5 years ago and now uses canned tomatoes to make her sauce  – and here’s the thing – the sauce is SO. MUCH. BETTER.

Let me emphasize that I typically do not condone eating canned foods. But the thing is that the local tomatoes are sometimes good, and sometimes not so good/just okay. Brands like San Marzano or Muir Glen are a lot more consistent and a lot better tasting! Other favorites include Red Pack, Nina, Contadino, and Tuttorosso. It’s hard to compete with companies like these, which have developed superior tasting tomatoes.

The other way to get a great sauce is to slow cook it, a process that really brings out the flavor.

We jar/can the sauce after cooking it but you can also freeze it if you have the space. Directions for preserving/canning are available on the Ball website. 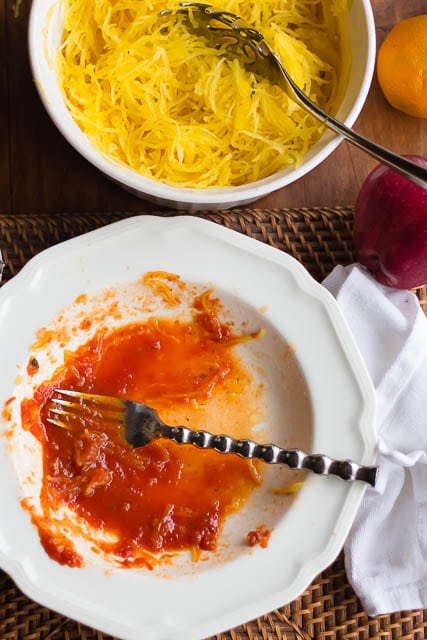 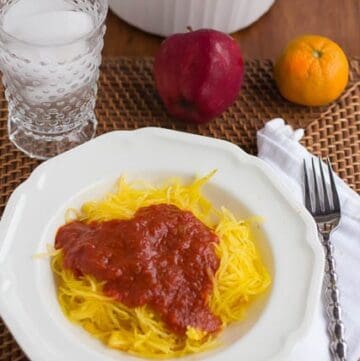 For the spaghetti squash:

For the spaghetti sauce:

Good brands include San Marzano, Muir Glen, Tuttorosso, Contadino, RedPack, Cento. Whole tomatoes and crushed should be processed in food mill prior to cooking to remove seeds. Makes about 3 quarts or 6 pints of spaghetti sauce.
Tried this Recipe? Pin it for Later!Mention @FeelingFoodish or tag #FeelingFoodish!

Welcome to Feeling Foodish! Founded in 2012, you'll find a growing collection of recipes that are sometimes simple, sometimes complex, but always delicious! We focus on family favorites like pizza, comfort foods like pasta, and Italian baking. Read more... about me! 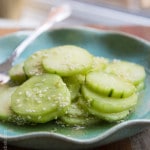 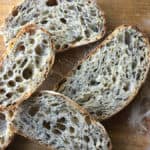