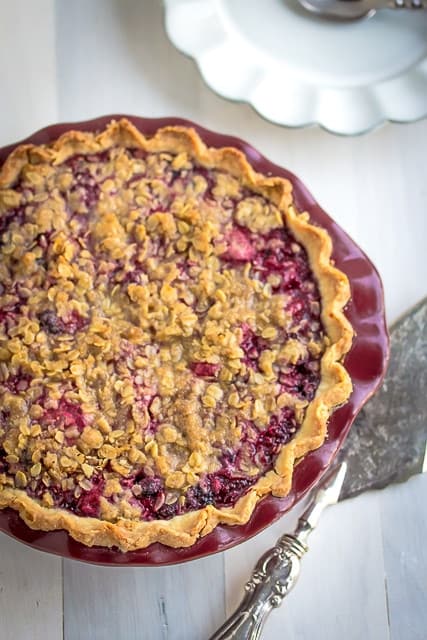 Oh my gosh. This pie. Is soooo good.

We discovered this pie when we lived in Michigan, just outside of Ann Arbor. There was a place nearby called the Grand Traverse Pie Company. Be still my heart. They made a slew of pies daily. Fresh and incredibly good.

Sadly, I can’t find another place that makes those kinds of pies here back home in the Philadelphia suburbs. Sure, we have the Amish farmer’s markets nearby. And they do make a decent pie. But they don’t make this pie. I’ve been able to find berry pies that either don’t have all the necessary berry varieties and there are those with a lattice topping in lieu of the crumb topping. I’ve also found pies that just lack flavor because of all the preservatives used to maintain freshness. Yuck.

Really – there is nothing like homemade pie!! I think this is where Grand Traverse did their job well since they claim to make their own dough and they make pies fresh, daily.

I suspect that this will be one of those recipes that my daughter will look for when she grows up and has her own family because she LOVES this pie.

The pie is tart, but not too tart, and sweet too.  The pie crust that I chose to make was based on a recipe from King Arthur Baking. Within the past month, I’ve made about 4 different versions of pie shells including Pioneer Woman’s recipe (called Sylvia’s pie crust) and finally settled on this one.

Some pie crust recipes call for 100% shortening and claim to be the flakiest ever and there are those who swear by the use of butter instead of shortening because the flavor can’t be beat. I chose the middle ground and used half shortening and half butter so I feel that I got the benefits of both worlds. I also add a tablespoon of vinegar to add additional flakiness.

But really, finding a good recipe for pie crust is only half the battle because rolling out that sucker is another battle, isn’t it? This is something that requires a great deal of patience and a good amount of flour because when that dough starts sticking, things can go downhill very fast unless you are patient. I used a fondant measuring mat underneath and it really saved me.

I found some great advice on Smitten Kitchen’s site about rolling out pie dough which really boils down to using liberal amount of flour and having lots of patience.  Her mantra is “Flour well, roll, turn, repeat”. Other very useful advice on pie crusts can be found on DianasDesserts. 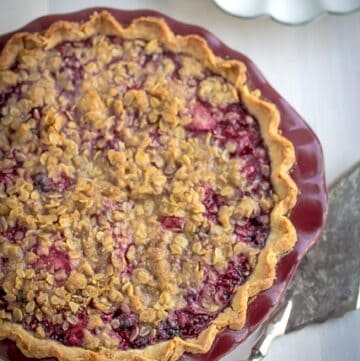 For the pie shell (makes enough for 2 single crust pies):

For the pie shell:

To make the filling:

To make the crumb topping

To make the pie 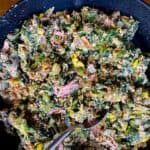