On to more vegetable this week…..

Cucumbers! I’ve been getting so many cucumbers from my local CSA this year. I usually just slice them up and eat them as is or toss them into a green salad, but this week I wanted to do something different.

Now, I usually make a salad with vinegar, a bit of red pepper and oil, but I wanted to try something different.

And so I found this great Asian cucumber salad, which was fantastic! Easy too – things that I just love in a recipe.

This can be made ahead of time, and actually should be made at least 20 minutes in advance to let the cucumbers martinate.

I love the addition of sesame seeds for added flavor and texture! I’m sure we will be making this again and again this summer as the cucumbers keep coming not only from the CSA but also from my garden which is growing nicely this year (here’s hoping that the critters stay away:) 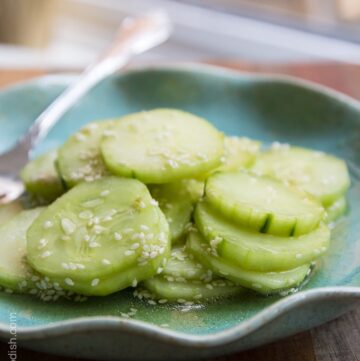